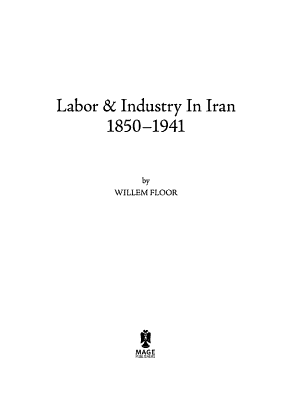 In the nineteenth century, Iranian reformers wanted to create an independent, modern state that could stand on its own feet. However, constrained by foreign influence, ignorance, and inexperience, their efforts at industrialization were an expensive failure. When a modernizing regime took over the country in 1925, it began the most interesting example of a state-directed effort at economic organization in the Middle East. Iran was able to lift itself up by its bootstraps by financing its own very capital intensive industrialization program without borrowing from abroad. But the people of Iran paid for their nation's modernization through heavy taxation, bad living conditions and dictatorial rule. And although unionization of labor failed, and bad working conditions, low wages and lack of labor laws remained, the much reviled Reza Shah had ironically been able to realize the dreams of the nineteenth and early-twentieth-century reformers. Willem Floor uses primary sources and documents, as well as statistics, to analyze the costs and benefits of Iran's efforts toward industrial modernization from the 1850s to 1941. This study is essential reading for anyone interested in the details of the economic history of modern Iran.