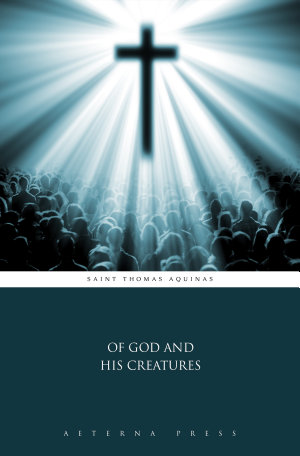 SOME years ago, a priest of singularly long and varied experience urged me to write “a book about God.” He said that wrong and imperfect notions of God lay at the root of all our religious difficulties. Professor Lewis Campbell says the same thing in his own way in his work, Religion in Greek Literature, where he declares that the age needs “a new definition of God.” Thinking the need over, I turned to the Summa contra Gentiles. I was led to it by the Encyclical of Leo XIII, Aeterni Patris, urging the study of St Thomas. A further motive, quite unexpected, was supplied by the University of Oxford in 1902 placing the Summa Contra Gentiles on the list of subjects which a candidate may at his option offer in the Final Honour School of Literae Humaniores,—a very unlikely book to be offered so long as it remains simply as St Thomas wrote it. Lastly I remembered that I had in 1892 published under the name of Aquinas Ethicus a translation of the principal portions of the second part of St Thomas’s Summa Theologica: thus I might be reckoned some thing of an expert in the difficult art of finding English equivalents for scholastic Latin.