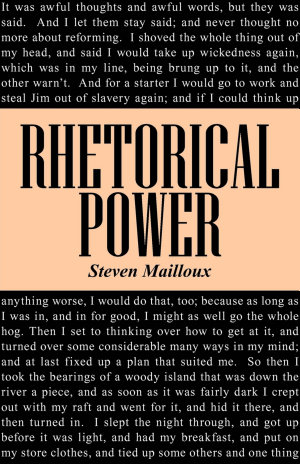 In this provocative and forcefully written book, Steven Mailloux takes issue with the validity of a number of distinctions commonly made in contemporary literary theory and cultural studies—distinctions between theory and history, reader and text, truth and ideology, aesthetics and politics. Mailloux first presents the case for a rhetorical hermeneutics and against foundationalist theories of interpretation. Doing hermeneutic theory, he argues, entails doing rhetorical history. By means of a detailed analysis of reader-response criticism, he highlights the connections between institutional politics and the interpretive rhetoric of academic literary criticism. Mailloux then uses Adventures of Huckleberry Finn as an exemplary text. Relating Mark Twain's rhetoric to the cultural politics of post-Reconstruction debates about racist ideology, he places his reader-oriented interpretation within the rhetorical history of controversies over the meaning and value of Huckleberry Finn. Finally, in a far-ranging study of cultural reception, he juxtaposes the twentieth-century concern about the topic of race in Huckleberry Finn with the nineteenth-century audience's very different concerns about juvenile delinquency and the "bad-boy boom." In the final part of the book, Mailloux restates his critique of foundationalist hermeneutics through readings of Ken Kesey, Michel Foucault, Edward Said, and Richard Rorty, and he concludes by examining the role of rhetoric and theory in a congressional dispute over the Reagan administration's reinterpretation of the Anti-Ballistic Missile Treaty. Rhetorical Power will be welcomed by readers in literary theory and American studies, as well as in such fields as speech communication, the sociology of culture, and social and intellectual history, and by others interested in the politics of persuasion.